Oregon will likely became the first state to pass a predictable scheduling law. The bill has been sent to Governor Kate Brown, who is expected to sign it. The law would be effective July 1, 2018.

Predictable leave laws add to an employer’s challenge to deal with leave under paid sick leave laws. Let’s assume an employee gives the employer three days’ notice of the need to use a PSL day. The employer could either have another employee work the hours of the employee using PSL or, if appropriate, use a temporary employee. If the employer does neither, the co-workers of the absent employee will simply need to work faster or harder.

Under the Oregon scheduling law, if an employer requires an employee to work additional hours with less than seven days’ notice (14 days effective July 1, 2020), the employer must pay the employee one hour of compensation as a penalty, sometimes called “predictability pay.” The law purports to have an exception to address an “unexpected employee absence” but the exception seems inadequate.

END_OF_DOCUMENT_TOKEN_TO_BE_REPLACED

Recall my post that a Linn County judge in December 2016 agreed with nine Oregon counties-plaintiffs that Oregon’s Paid Sick Leave Law is an unfunded liability.  The Oregon Constitution states that a county need not comply with a state unfunded liability if the county must spend more than one hundredth of one percent of its budget on the unfunded program.

The plaintiff-counties claimed that their costs for compliance with the Oregon PSL law exceed the .01% threshold.  For example, Linn County had claimed that it must spend more than $41,000 on the program, substantially more than the $14,000 which is .01% of its budget.

The judge ruled earlier this year that since an expert retained by the State will testify that each of the counties need not spend .01% of their respective budgets on the law, the .01% issue must be resolved at trial. A bench trial is scheduled for July 19, 2017.

Based on a report of the oral argument on the financial threshold issue last December, the judge seemed to be interested in whether allowing employees to accrue paid sick leave is an absolute obligation or a “contingent obligation” since some employees may never work long enough to become eligible for sick time and those that do may use some, none, or all of the accrued time.

This case affects the plaintiff-counties, as employers. It does not affect private employers within Oregon or other Oregon counties.

A Linn County judge last month agreed with eight Oregon counties that Oregon’s Paid Sick Leave Law is an unfunded liability. Round one to the plaintiff-counties. My report on that decision is here.

The Oregon Constitution states that if a local government must spend more than one hundredth of one percent of its budget on an unfunded new program or increased level of service, the local government “is not required to comply” with the law.  Round Two involves whether the counties must spend more than .01% of their budgets to on the sick leave law.

Last week, Judge Daniel Murphy, who had issued the December opinion, held that the State can challenge Linn County’s calculation. Linn County claims that it must spend more than $41,000 on the program, substantially more than the $14,000 which is .01% of its budget. The court allowed the state to conduct discovery and retain an expert to research the county’s financial records. The counties have 90 days to produce records to establish that their costs exceed the .01% financial threshold.

Based on a report of the oral argument on the financial threshold issue, the judge seemed to be interested in whether allowing employees to accrue paid sick leave is an absolute obligation or a “contingent obligation” since employees may use some, none, or all of the accrued time.  The argument also seemed to focus on whether all county employees would be eligible for sick time since some may work less than 90 days.

This case affects the eight plaintiff-counties, as employers. It does not affect private employers within Oregon or other Oregon counties.

Nine Oregon counties need not comply with Oregon’s Paid Sick Leave Law because it is an unfunded liability imposed in violation of the Oregon Constitution, a Linn County Circuit Court judge ruled last week. The ruling affect the nine counties that were plaintiffs in the case, and does not affect the application of the PSL to other employers within those counties. 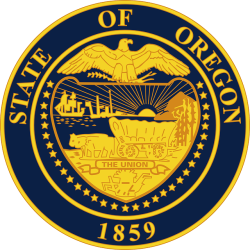 Each plaintiff-county submitted an affidavit establishing that it would cost more than one hundredth of one percent of its budget for administrative expenses relating to the PSL law. These expenses included training costs as well as a “new and separate layer of record keeping, separate annual data input, separate personnel rule changes and employee notification, and a higher volume of tracking employees’ sick leave time.”

This ruling is limited to these nine counties, as employers. I suspect that the other 27 Oregon counties and the other local governments are now sharpening their pencils and calculating their costs associated with the PSL law. Additional “piggyback” litigation seems likely.